I’ve had a few inquiries about my absence from my blogs and I thought I would share with my readers at least one thing I did to keep myself busy over the past several months.

I stepped away from writing, but I still had this creative urge so I became a Pinterest junkie and started working on Halloween props. Initially, I looked online to see if I could find a few small projects to try, just for fun. I thought I’d make a few decorations for a potential upcoming party but I enjoyed the process so much I began taking things to the next level.

I should stress that I am NOT an artist and the photos below are my first attempts at making anything like this. They are not terribly good but it was a nice way to create something from nothing (much like writing) and indulge my darker side at the same time. I have taken a break from my creations but I think I’ll be getting back to my “Dr. Frankenstein” days very soon.

If anyone is interested, I will post links to some of the very talented people I found online and you can see how these kinds of things should actually look.

My first pumpkin was very awkward and goofy looking and I learned a lot of “don’t do this” kinds of lessons. 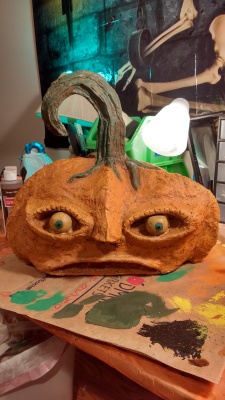 My second pumpkin turned out just a little bit better.

From here I decided to work on my first real “creature”. I thought a witch would be a nice place to start. 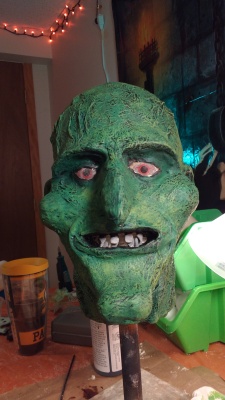 Here she is without her hair.

I don’t like how her eyes turned out. I used cheap rubber eyeballs and I won’t make that mistake again. I have learned a few techniques for making my own eyes and will probably try that next time. But I do like how the skin texture and color turned out.

I’m still perfecting my painting skills, but I thought this dry-brushing turned out well.

Here she is with hair.

And finally the hat I made.

Next I wanted to do a scarecrow. I still don’t have his hat and that’s one of my next projects. I’ve decided to make it from scratch because there’s a certain look I want to achieve. But the head turned out ok. This was my first time working with burlap. The color came from a gel stain and I love the final result. 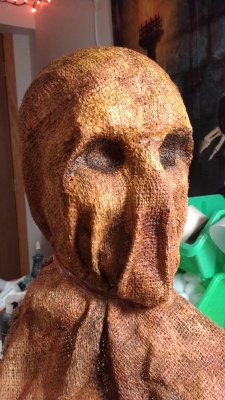 On a whim, I decided to make some kind of weird demon skull… thing.

And this fellow was my first attempt at a zombie skull. Not great but I think my next one will be better. 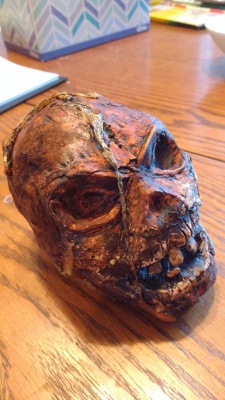 Before Christmas I thought I’d try a full-sized Grinch but I got stalled and this is about as far as I’ve gotten. 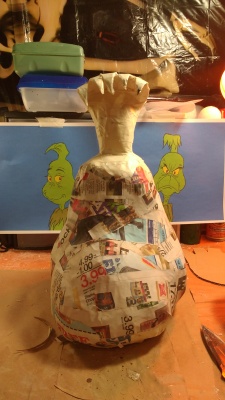 So yeah, anyway… there you have it. I’d love to hear your comments. Just gonna sit back with my coffee and see what other strangeness my twisted mind can fabricate. Cheers! 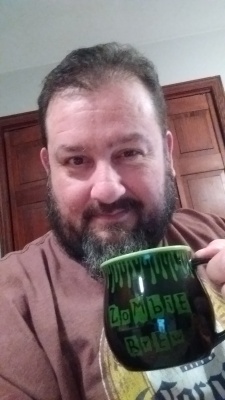 Check out these folks and their videos. I learned a lot from them.

Brad Goodspeed (The Butcher of Provincetown)