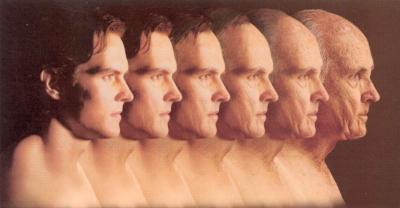 “What goes on four feet in the morning, two feet at noon, and three feet in the evening?” ~ Modified Riddle of the Sphinx

I’ve never been quite sure what is meant by the phrase “aging with grace”. How is this done? Is this a competition? Are there style points given? I’m not sure what’s “graceful” about watching time go by and accumulating a head full of memories. I happen to think the aging process is kind of absurd. For example, a few years ago I got my first gray hair. Not on my head, mind you. This was in my eyebrow. At first I thought it must be a really blonde hair but I pulled it out and examined it and sure enough… gray hair. I thought this was odd. I reasoned that getting a gray hair in your eyebrow is probably the second worst location where it can show up. (The first being due south. That’s just gross and depressing)

I wondered about this hair. How did it get there? Was it on its way to my head and somehow got lost? Did it use MapQuest? Did it take a wrong turn in Albuquerque? Did it ask a woman for directions? (Yes, I’m a chauvinist pig, I know.)

“So like… umm… you go up the face, right? And then you like… pass the nose and go by these totally cute eyelashes. They are sooo adorable, like Oh My God! So anyway, then you go by this thing that looks like… do you know my friend Jenni? No? Well she’s got this lamp that’s so cool. Anyway, look for the thing that looks like her lamp and then you’re gonna take a right… or is it left? Ok so like, you’re gonna take either a right or a left, I don’t remember and then you just keep going until you get to where you’ll see all this hair just all over the place. You can’t miss it.”

I can tell I’m getting old because I find it difficult sometimes to explain certain things from the past to my sons. Once I attempted to explain and describe a pinball machine. I told them it was an electronic game I  played in my youth and my youngest asked, “Was it on X-Box or Wii?”

Once I tried to have a discussion with a young early twenty something girl (There was a time when I would have referred to her as a woman but now she’s a girl. In another 20 years I’ll probably think of her as an infant.) about music. I mentioned the Beatles and she looked at me quizzically and said “Yeah, I think I’ve heard of them. Weren’t they around in the ’50’s?”

“It was the 60’s and early 70’s actually but nevermind.” I replied “What about The Doors?”

Now she looked at me like a deer staring at headlights. “You know… “Riders on the Storm? Light My Fire? ”

Sigh… ok, I thought, let’s move up a decade. “How about Def Leppard? Have you heard of them?”

I’m not sure how, but I refrained from punching her in the mouth.

“Old people music huh? Is that so?” I said through gritted teeth. “Well let me ask what you listen to.”

She rattled off names of artists and singers I’d never heard of nor would ever want to hear. Top 40 pop music. Manufactured fluff. I didn’t tell her that though. I was polite. And sadly, she had a point. The music I listened to as a teenager, the stuff that made the older generation cringe just a bit is now being played in my local grocery story. That is, without question, the defining moment when you know your generation has passed it’s prime and the younger set is moving up.

I admit, I am a bit jealous of my grandmother and her generation. When she talks about her childhood, she draws some serious contrasts. As a child she had no television, no refrigerator, no air conditioning… even cars were kind of a luxury. Compare that to life today and it’s astounding how much she’s seen in 96 years. Sure I can lay claim to having no internet and no cell phones. Tv’s were much smaller and boxy and if you wanted to change the channel, you got up and turned a knob. As a young boy our TV was black and white and had the ever popular “rabbit ears” with aluminum foil on the ends to improve reception. My first video game was “pong” played on an Atari 2600. I don’t think we had cable or a microwave until I was nearly in my teens. But those things are minor compared to my grandmother.

I’ve gone from living in a body that felt darn near indestructible to one that aches whenever I get up in the morning. In my youth I was very active and as a result I was scratched and bruised and scraped and never gave it a second thought. Now I have to get regular prostate exams, keep my cholesterol and blood pressure down and wear glasses to read. Damn those free radicals!

So yes, I accept that I am not the man I once was and while I must sacrifice some of the benefits of youth, I embrace and cherish what little wisdom I have gleaned from my years. And since I’ve never really been graceful at much of anything, I suppose there is no reason to start now. Instead I’ll follow the advice of the poet Dylan Thomas and perhaps I can make what time I have left really worth something.

An excerpt from his poem Do Not Go Gentle Into That Good Night.

Do not go gentle into that good night,
Old age should burn and rave at close of day;
Rage, rage against the dying of the light.

Though wise men at their end know dark is right,
Because their words had forked no lightning they
Do not go gentle into that good night.

Good men, the last wave by, crying how bright
Their frail deeds might have danced in a green bay,
Rage, rage against the dying of the light.